Bo has a severe peanut allergy. He has been allergy tested twice within the last year and both times had a RAST score of over 100 with specific response to peanut as a severe allergen. Though he has not tested positive for any other food allergies besides peanut, he only eats foods that are peanut free and tree nut free just to be safe. Bo's peanut safe food list

Currently, Bo is in a 2 year peanut allergy research treatment study at Arkansas Children’s Hospital (ACHRI) in Little Rock. This medical research on peanut allergies is testing the effectiveness of a food allergy desensitization treatment therapy based on using small, daily doses of peanut flour to build up his tolerance. [NOTE: This is a double-blind research study and so Bo may actually be receiving a placebo instead of peanut flour, we don't know and neither do his doctors. The study will be unblinded in the summer of 2008 so that we will find out if we have been receiving placebo for the first year. If we have been getting the placebo then we will begin getting peanut flour and continue the study for two more years.]

UPDATE June 16, 2008: On Bo's 1 year of treatment anniversary, we learned that Bo had in fact been getting a placebo all year vs. the real peanut flour. So we are now repeating the year one protocol with actual peanut flour. Read more

As part of the study, every morning Bo eats a very small amount of peanut flour mixed with Mott's apple sauce or chocolate pudding. The peanut flour dosage is increased in regular intervals every few weeks. Our hope, is that Bo will at least develop a higher tolerance for peanuts so that we don't have to worry about him having a deadly reaction to accidentally eating something that contains peanuts or was made in a facility that manufactures nut products.

Hopefully, medical research like this will lead to a treatment or cure for life threatening food allergies and peanut allergies. Our family is very encouraged by his peanut study results so far. 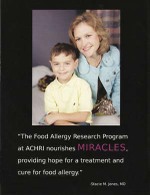 Bo participates in the peanut allergy treatment research at Arkansas Children’s Hospital Research Institute (ACHRI), under the direction of doctor Stacie M. Jones, MD in the Division of Allergy and Immunology. Dr. Jones, nurse Karen and the rest of the doctors and nurses at ACHRI are all lots of fun. They take good care of the kids and parents! Special thanks to mom for doing the research and working so hard to get me qualified for the peanut allergy study!

We have met kids who are in other food allergy research treatment studies at ACHRI who have greatly increased their tolerance level after a year of treatment. Some of the study kids we have met have increased their tolerance for peanuts from 1/100 of a peanut, up to the equivalent of 13 peanuts without a reaction! In fact, some of them who used to have reactions to trace amounts of peanuts before the study, now actually eat a teaspoon of peanut butter everyday to maintain their higher tolerance!

Arkansas Children’s Hospital is very kid friendly, it has a water garden, aquariums, playground area, caves with dinosaur bones and all of the people at the hospital are super nice to the kids! Did we mention they have TV and Nintendo Game Boys in the research lab to keep the kids entertained…sweet! Learn more about the food allergy research programs at ACHRI

New food allergy research consortium focuses on peanut allergy
Medical News Today; June 25, 2005
The only advice doctors can give to the 4 percent of Americans with potentially life-threatening food allergies is to avoid those foods, often nuts or shellfish. But that may change as researchers...

Children at Duke fight food allergies
The News & Observer; December 5, 2006
New research by Duke physicians suggests a way out for children with severe food allergies such as peanut or egg, feeding them gradually increasing amounts of the foods that sicken them...

I have a cousin who is severely allergic to peanuts. I wish there was a treatment like the other smaller allergies have like pollen. I really hope that we can find some way to find newer treatments than avoiding the product.

Why have we not got a cure for peanut allergy suferers all immunisations contain the culpret to build up immunity ????

My 2 1/2 year-old daughter has a peanut allergy...how do I get her qualified for a trial?

I have some allergies and this post helped me a lot. Thanks, food allergies in now a no-no to me.

This is interesting topic.This really help other parents with this kind of problem to their kids.

The comments to this entry are closed.